Tear off that scarf and burn it !

What’s wrong with this picture ? 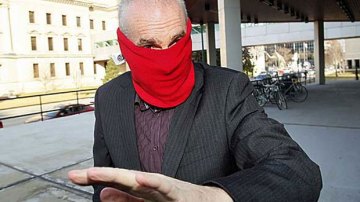 I have a red scarf like that which I have enjoyed wearing for several years. My plan now is to burn it. Graham James used the scarf to avoid showing his face as he came and went from a courtroom in Winnipeg.

He is Canada’s most notorious pedophile, and a never-ending disgrace to our favourite past-time. Most of us cannot begin to understand what goes on inside the mind of a sexual predator like James. Hopefully his story has yielded some valuable lessons. Hopefully the people who hire coaches are more careful and thorough in screening such men before placing them in such a position of trust. Did Judge Catherine Carlson get it wrong when she sentenced him to two years for his multiple assaults on Theron Fleury and heaven knows how many other young hockey players? I’m betting that she has had many second thoughts about her decision to not allow cameras in court for the sentencing, especially after seeing that ridiculous photo with the red scarf.

Legal experts say James will likely be out of prison before Christmas, since he will undoubtedly qualify for parole after serving one third of his sentence. Sheldon Kennedy, the first of the victims to stand up and blow the whistle on his former coach, may have put it best. He said no sentence can ever restore what he and the other men have lost because of the actions of this man. It’s been more than 15 years since Kennedy made his bold move. I wonder if he realized at the time how many more times he would have to relive his nightmare and what it would do to him.

We do know that pedophiles are masters of manipulation. Graham James has manipulated Canada’s justice system a number of times. Judge Carlson may be another of his victims. But as others have pointed out, when it comes to sexual abuse, we’re not dealing with a justice system. Rather it’s a legal system. It has many flaws when it tries to deal with so many offences.

It has been a very dark and difficult 12 months for the game that Canadians love so much. Here’s hoping we have at least come to realize that people like Kennedy and Fleury are heroes that all boys and girls who lace on skates should look up to.