My blogging patterns continue to evolve, and I welcome comments and suggestions.
Here for the first time is a ‘repost’ of an article I just came across. I have not always been the same page as Murray Dobbin politically, but I found this to be one of the best examinations of the Justin Trudeau story to appear since Trudeau’s announcement last week that he is indeed a candidate for the Liberal leadership, the job his father held from 1968 – 1984. .. Roger

Whose Liberals Will Justin Trudeau Lead?
Will he disavow the Chretien-Martin era that betrayed his father’s vision?

You would think that federal Liberals would by now have immunized themselves against the affliction that almost did them in: delusional giddiness at the prospect of a political saviour. It is embarrassing watching Liberals talk about Trudeau 2.0 — as if outpunching a Conservative in the boxing ring somehow qualifies for him taking on Stephen Harper’s right wing political machine. 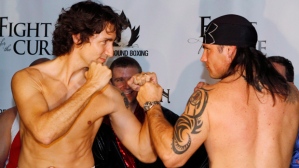 Any euphoria accompanying Trudeau’s leadership bid is rooted in a convenient amnesia about just what the Liberal party is and what it has stood for over the past 18 years under Jean Chretien and Paul Martin. While Justin might make people feel good, his party effectively paved the way for what Stephen Harper is now doing to the country by establishing the new political paradigm by which big business runs the country.

To be sure, Harper, with his unvarnished libertarianism is unique in Canadian political history in the degree to which he wants to dismantle the activist state and democratic governance. But the Liberals are so complicit in this grand project the notion that we should turn to them for salvation is laughable. It was Paul Martin who, more than any other finance minister including Flaherty, gutted the federal state and boasted that he had taken federal spending (as a percentage of GDP) back to levels not seen since 1950.

Paul Martin’s legacy consists of two principal items: slashing 40 per cent of the federal contribution to social programs while ending the universality principle and then implementing a five year, $100-billion tax cut for corporations and the wealthy that ensured those cuts would never be reversed.

Where was Justin then? Did he write an op-ed denouncing this vicious attack on what previous Liberal and NDP parties had created? Did he call up Paul Martin and ask him what the hell he thought he was doing? If he did, now would be a good time to tell us about it.

Trudeau could get a lot of mileage from criticizing what his party has done to the country and pledging to reverse its course to re-establish the principles of governance that his father actually believed in. That, of course, is the real litmus test of any new aspiring leader, especially someone young like Trudeau promising renewal. Is he willing to sacrifice a bit of the loyalty that is expected of him to be truthful to voters? The answer: only if he really believes that mistakes were made.

There is no indication that Trudeau thinks any mistakes were made. He is, in his attitudes, ideology and patrician background, a full patch member of the Liberal gang. The only thing likely to be renewed is classic Liberal opportunism: run from the left and hope to govern from the right. The 1993 Red Book of Liberal promises turned out to be a book of lies. Trudeau will have to work hard to convince people he won’t play the same game.

Trudeau’s opening leadership speech was very short on any policy details but there are a number of key issues that we should keep an eye on as his campaign evolves. These issues — though not an exclusive list — will determine where on the political spectrum he wants to establish his “renewed” party. In short, what he will do to take back the middle from the NDP? What will distinguish him from conventional Liberal hackery?

Key issue number one would be his attitude towards some kind of formal or informal arrangement with the NDP to rid the country of Stephen Harper. This is the one issue he decisively answered in launching his bid: there will be no “formal co-operation,” period.

Key issue number two is the Enbridge pipeline. If Trudeau wants to recapture the seats his party lost to the NDP in B.C. this issue will be critical and here, too, he hinted at his position, though it is contradictory. He told a media scrum in Richmond that Enbridge would have to come up with a better plan if it wanted to go ahead. But he criticized the NDP’s economic policies for “attacking success” — that is, the tar sands. He has also said that he wants to start his rebuilding in Alberta. He can either do that or reclaim lost B.C. seats, but he can’t do both.

Key issue number three is taxes and the revenue needed to actually run a country and pay for the social programs Canadians in overwhelming numbers say they want. Here, too, Trudeau could catch the NDP flat-footed and pledge to add a couple of tax brackets for the stinking rich and the not-quite-so-stinky, and add back a couple of the seven percentage points lopped off the corporate rate by Harper. If you think that’s likely you may have forgotten who runs the Liberal party.

Key issue number four is climate change, Kyoto and some kind of carbon tax or cap and trade plan. This is, of course, especially important for the young people Trudeau hopes to attract to the party (he apparently has 153,000 Twitter followers). If does not have a clear policy on this issue which more than any other energizes young people, he hasn’t a chance of engaging them.

Key issue number five is the question of industrial policy. Unfettered laissez fair economics has been a disaster for Ontario and Quebec, producing the famous Dutch disease issue that the NDP has used effectively. If Trudeau cozies up to the Alberta oil industry and lets Ontario and Quebec manufacturing swing in the wind, he can kiss any hope of being prime minister goodbye. A new industrial policy? Not if the financial sector has anything to say about it.

And speaking of the financial sector, what will the hip Mr. Trudeau do when the housing bubble truly bursts and tens of thousands of people face foreclosure? Does he have a plan? Will he — and this would make him unique in the country’s history –– actually confront the banks and make them pay for their grossly irresponsible lending practices (including thousands of liars’ loans)? Again, we would have to imagine a man totally inexperienced in the exercise of real power confronting the people who have dominated his party, and the country, for decades.

Lastly, will Trudeau pledge to reverse the most egregious actions by the Harper government regarding a whole raft of executive outrages — cuts to the CBC, the environment department, public science and more? That alone would be a winner, taking the sting of voters’ despair out of future Harper outrages.

Who really runs the Grits?

The Liberals could actually outflank the NDP on the centre-left on several of these policy areas but the centre in the Liberal party has moved to the right even since the days of Chretien. Many of the 25 per cent of people who identify as Liberal supporters have long ago decided they can never vote for the NDP. How many of these voters is Trudeau willing to alienate in order to scoop up recent NDP converts?

Then there is the question of the state of the party after Martin’s extremely destructive leadership campaign. Martin’s vicious campaign left the party traumatized, weak and deeply divided. Whoever takes the reins had better have a very clear idea of what they want or — like Michael Ignatieff — they will be pulled back and forth by different factions in the party and present an easy target for Harper’s well-honed machine.

That doesn’t bode well for Trudeau who, with four years experience in the House, has shown little initiative in terms of where he wants the party or the country to go. It’s not just the public Trudeau has to impress. It’s the power brokers in his party who will quickly fill policy and strategic gaps created by any weakness or uncertainty in their leader.

It’s not a question of whether or not Justin Trudeau is just a pretty boy. He won’t be. He’ll be a pretty boy whose policy prescriptions and political persona will be judged carefully by those who agonize over Stephen Harper’s death grip on the country. If he wins, and he likely will, it will be a short honeymoon.

I shall be back to prairie stories later this week. Keep warm, and don’t eat too much leftover turkey.